This was originally published in LBF News in May 2012. This story is from Koori Mail and written by Kirsti Parker. 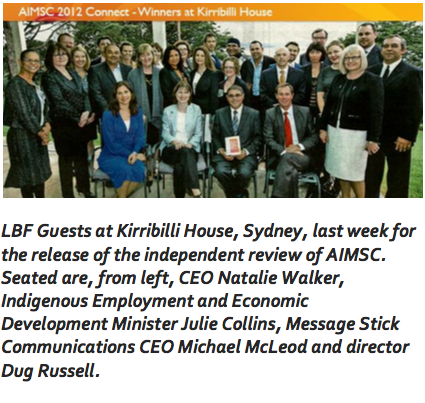 Latest figures show the council has generated $22.9 million in contracts and $13 million in transactions between its members and suppliers.

The Australian Indigenous Minority Supplier Council (AIMSC) is growing faster than expected and helping create a sustainable and prosperous Indigenous enterprise sector, according to an independent review. The not-for-profit organisation was established in September 2009 to encourage the growth of Indigenous enterprises by linking corporate and government buyers with certified Indigenous businesses.

Indigenous Employment and Economic Development Minister Julie Collins says a review by PricewaterhouseCoopers (PwC) shows the council is going from strength to strength and exceeding expectations.

“AIMSC has become an integral part of the Indigenous business sector, making it possible for more Indigenous businesses to tap into government and private sector contracts,” Ms Collins said, speaking at the launch of the review report at Kirribilli House in Sydney early last week. “It’s good to see the Australian Government’s investment in AIMSC is making a real difference to the lives of Indigenous Australians.”

Latest figures show the council has generated $22.9 million in contracts and $13 million in transactions between its members and suppliers, certified 124 Indigenous suppliers and attracted more than 130 corporate and government members.

“Supporting the Indigenous business sector is crucial as we work towards halving the gap in employment outcomes between Indigenous and non-Indigenous Australians,” the Minister said.

AIMSC itself couldn’t be happier with the review results.

The PwC review makes a number of recommendations to help AIMSC maintain its growth and momentum, including strategies to expand nationally, build its member and supplier base and develop into an independent and sustainable organisation well into the future.

© 2019 All Rights Reserved Murumal | Privacy Policy Murumal acknowledges the traditional custodians of country throughout Australia. We pay our respect to them, and to the Elders past and present.